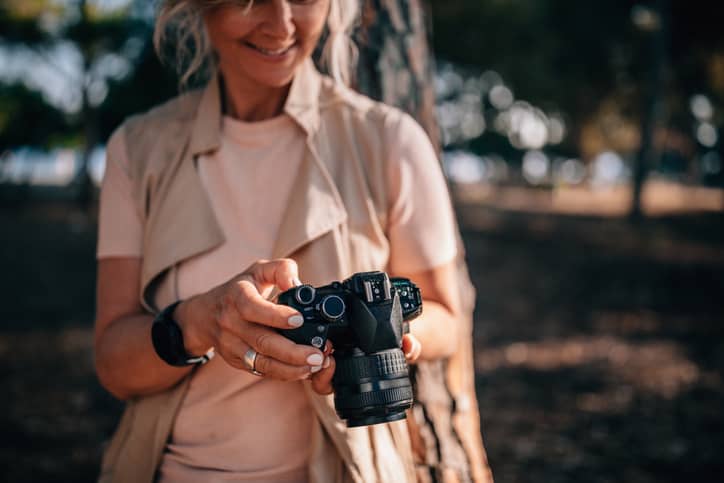 As we approach the fall buying season, you might be thinking about a new camera.

And, yes, there are a ton of choices out there. More than ever.

The good news is that you can do stock photography with just about any camera, even your cell phone.

But, if you’re feeling ready for an upgrade, here are some awesome, beginner-friendly options.

Each of these cameras comes bundled with a removable lens, and you can also purchase additional lenses as for the type of photography you like to do… or if you’re just one of those gear collectors!

Keep in mind that there is no perfect camera out there for every situation. There are always trade-offs and what may be great for one person may not work as well for another. It’s always a good idea to do your own research, but hopefully this list is helpful to get you pointed in the right direction!

Sony A6000. This small, mirrorless camera was originally released in 2014, but it’s still extremely popular and widely considered one of the best beginner options on the market. It’s extremely compact, and still has the option to use interchangeable lenses. It comes bundled with a 16-50mm lens for under $650. Do note that Sony is an industry leader in image quality, but at times the menus can be confusing. So, if you’re easily confused by technology, you might consider one of the following brands…

Canon EOS M50. Here is a high-quality, easy-to-use camera at a reasonable price with a 15-45mm lens. It’s a little bigger than the Sony, above, but not by much. Originally released in 2018, this camera offers both a viewfinder and a fully articulating touch screen, also under $650. It can also send photos wirelessly, directly to your smartphone which is a pretty slick feature.

Fuji XT200. Newly rolled out this year, the XT200 improves upon its predecessor the XT100 with faster autofocus and an updated image sensor. It’s a great beginner camera with a large articulating touch screen, viewfinder, and plenty of outside dials in the classic style that Fuji cameras are known for. If you’re confused by menus, having your controls on a bunch of dials on the outside of the camera is super handy. Fuji offers a great selection of lenses and this camera comes bundled with a 15-45mm lens for just under $600.

Olympus OM-D E-M10 Mark III. Olympus is known for its smaller image sensors and excellent in-camera image stabilization system. This equals a compact, travel-friendly camera that helps you get sharp images, even in low light. This version, with included 14-42mm lens, comes in at just under $500. There are a ton of great lenses to choose from in the Olympus system, which is also a major plus. Note that the next generation of this camera, the E-M10 Mark IV has recently been announced and is available for preorder now.

Panasonic Lumix DMC-G85. Like Olympus, this camera from Panasonic uses a smaller image sensor, which allows the camera to be more compact. Olympus and Panasonic also share the same lens mount, so between these two brands there is an awesome selection of lenses available, including the 12-60mm bundled with this camera for under $700. It’s a lightweight, weather-sealed camera that’s easy to use with dual control dials and a touchscreen.

Nikon Z50. Nikon has recently drawn a lot of attention with their popular Z series and the new Z50 is Nikon’s impressive, entry level camera in the lineup. It boasts a speedy 11 frames per second burst rate, high quality 4K video, and a great little 16-50mm kit lens for just under $1,000.

If you’re a beginner looking to get into stock photography, you really can’t go wrong with any of these six cameras.

A tip, if you’re looking to save money: Check the Used section at B&H, where you can find gently used, new-er cameras at great prices, fully inspected and cleaned by B&H.

But before you splurge on a new (or gently used) camera, remember that it’s not the camera that makes the photographer. All you really need is whatever camera you have and loads of practice!

However, having a camera you love to shoot with CAN make the whole thing a lot more fun.